I'm just about at the point where I can copy and paste the intro paragraph for this feature from last year's.  Once again, the majority of my card dollar went toward wrestling cards, set building, and after that, going to my first National.  The highlight of my collecting year was probably finishing my 1971-72 Topps basketball set.  The low point was finding out I no longer had access to THORZUL WILL RULE.  Following the death of one blog, another emerged, along with the opportunity to write some new history.  Barring any huge surprises between now and midnight, I am done opening packs of cards for the year, so it's time to show off the best cards I pulled in 2019. 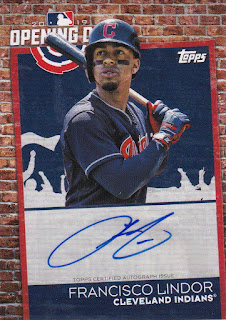 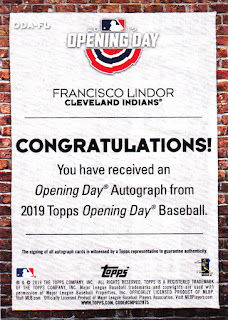 Why I Like It: Aside from the comedy club poster design, it's just nice to get a hit when one is not guaranteed.  Lindor seems like a good dude, and to be at 28.6 WAR after four-and-a-half years in baseball is pretty outstanding.  I'll be keeping an eye on Lindor this season, as Cleveland hopefully proves 2019 was just a one-year aberration with the Twins coming in first in the AL Central.