Trade Me Anything XV: #2

I took it easy this Thanksgiving, food-wise.  I only took a second helping of the sausage stuffing, and had one piece of pecan pie later that evening.  For some reason my mother-in-law has been under the delusion that I'm the world's biggest fan of apple pie.  I like it OK, but now I feel bad when I step away from the dessert table without having a slice.
We're back for a second helping, however, of TMA.  This one comes from Tim, another longtime trader of anything.
Giving:
#70YT-31 Mark McGwire 70 Years of Topps, #86B-16 Bo Bichette 1986 Topps 35th Anniversary, #US113 Aaron Civale Rainbow Foil

Getting:
Six-pack of Brewers
I'll always be a sucker for green-bordered cards.  Those two Gypsy Queens look great. 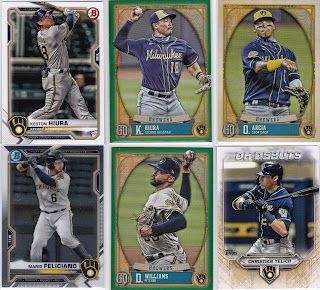 Complete 1992 Fleer League Leaders Subset
That Canseco is a nice one.  This was a set I finished after buying a box on eBay while in college.  I probably didn't eat for a few days so I could buy it. 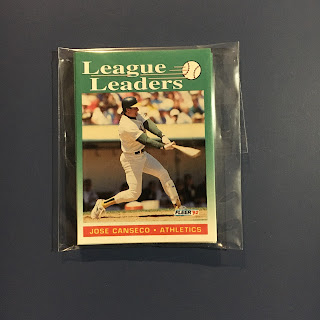 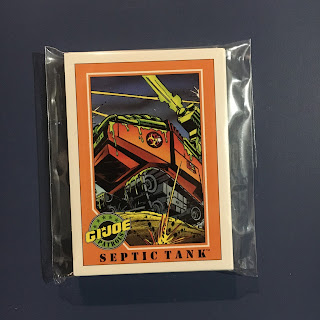 These cards are certainly something special.  Last year I bought a sealed box, and now I can't bring myself to open it.  This looks like a set I would like to pick up on the cheap so it can stay unopened.  Here are my five favorite cards from this lot.
#25 Shipwreck
If you're at all interested in video games, you should be listening to the CAGCast.  One of the hosts goes by this handle. 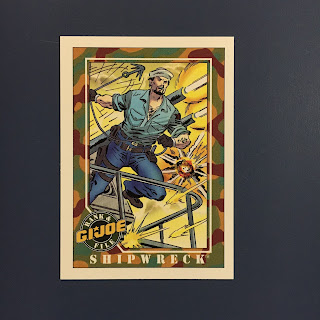 #28 Storm Shadow
A best-of list without this character is not worth reading or writing. 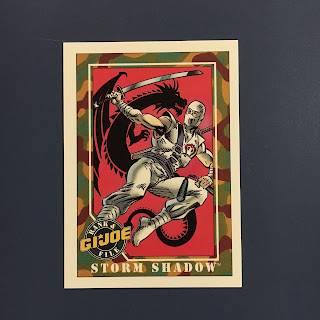 #115 Brawler
This has everything a kid would want from a G.I. Joe vehicle.  I never owned this one, but there were many others like it. 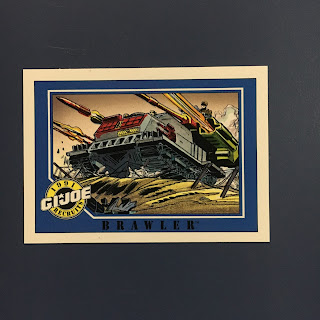 #70 Air-Tight
We definitely had this guy at my house.  His rubber band snapped and my mom superglued him back together, limiting the mobility in his lower half.  Such is the life of a soldier. 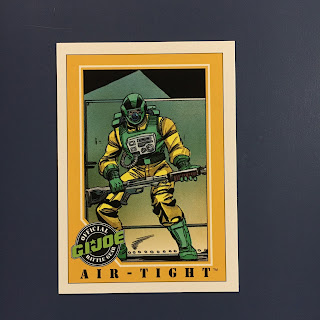 #178 Golobulus
This was the type of figure I'd find in the guy box at a cousin's house, not knowing who the fuck it was supposed to be.  Part serpent with a super-complicated backstory.  He stirs the imagination and gives off an icky vibe. 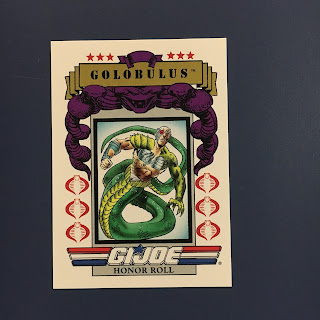 Thanks for the good stuff, Tim!

Trade Me Anything XV: #1

We are now ten days away from the start of Card-vent, if you can believe that.  The world has most turned back to normal, barring the small sheets of textiles strapped to our faces while in public.  Seriously, who would have thought that I'd be using the word "mask" fifty times a day?  Just another stupid thing to fight about with 8-year-olds.  Anyway, I still enjoy bringing you the card content you desire, and at this time of year, it's a slow trickle of Trade Me Anything packages.
The first one to arrive came from longtime friend of the blog, Kerry.
Giving:
#ASG-5 Shohei Ohtani All-Star 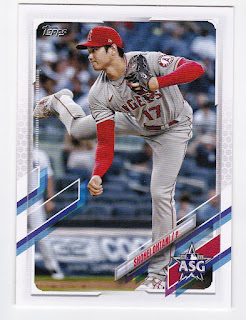 2021Panini Prizm #156 Robin Yount
I have no idea which of the 137 varieties of Prizm this is, but it look really great in person, not so much when scanned.  My Yount collecting has dropped off a cliff recently, but tastes, as they say, can change. 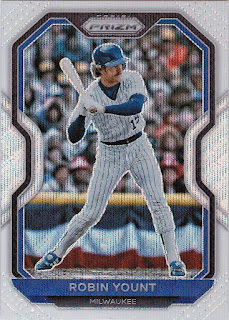 2012 Panini Golden Age #26 Jack Dempsey
The back of this card mentions Dempsey being a part of the first live boxing radio broadcast.  Could there be anything duller than boxing on the radio? 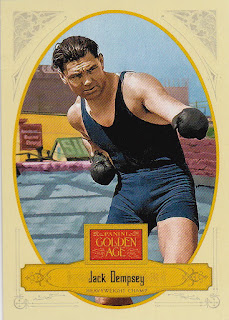 1994 Classic #23 Checklist/Portland Pirates 1994 AHL Champions
We're about two hours away from the start of the Portland Timbers' 2021 playoff campaign.  Let's hope for another Portland championship this year! 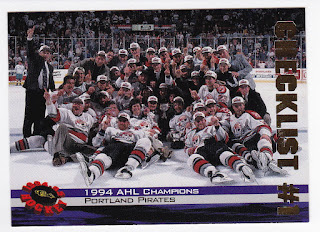 Email ThisBlogThis!Share to TwitterShare to FacebookShare to Pinterest
Labels: Trade Me Anything, YOUNT

Bidding Under the Influence #10 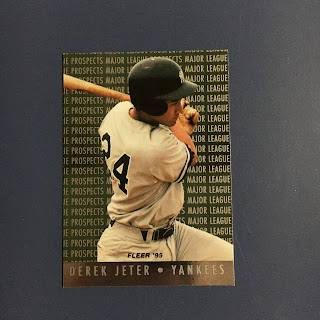 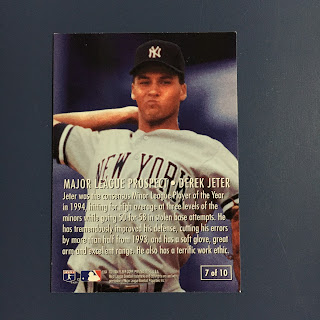 What Was I Thinking?:
Most collectors know that 1995 Fleer is a hideously designed set.  And as far as inserts go, this one hurts the eyes almost as much as the base cards do.  It's almost never a good idea to print the same word(s) over and over again as an aesthetic choice.  In fact, this card reminds me of a store I often drive past.  It's this crummy little shop that sells replacement parts for appliances.  I would see it every time I went to the gym, but since I dropped my membership several years ago, I don't see it quite as often.  Its signage, however, is still burned into my brain. 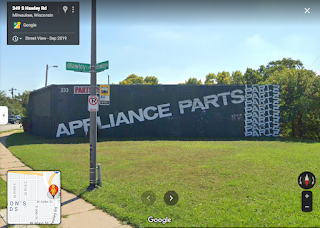 Why the word "PARTS" is repeated ad infinitum at one end of the building, the world may never know.  It must work, though, since that place appears to be going strong since I moved into the area almost 20 years ago.  That Jeter guy turned out to be pretty OK, too.
Posted by Death Stare Cards at 1:25 PM 2 comments:

Trade Me Anything XV Has Arrived!

I've been having a really nice weekend.  Once the Friday workday ended, I got my miles in, did some planning for the next week, and then I was home free.  This year's box of Update arrived, I believe, on Tuesday, so it's been sitting there taunting me all week long.  It was the first box of baseball cards I've opened in all of 2021, which I suppose tells you all you need to know about my thoughts on the state of the hobby.  Doing Trade Me Anything is the most fun I have with new baseball cards in a given year, and I love doing it, but it's too bad that once a year is the totality of it all.  (Speaking of once a year, did you see that this feature is now in its 15th iteration??? Boom whackers and Club crackers, kind of hard to fathom, ain't it?)
Actually, it feels like last year's TMA just happened, back when I was operating out of my basement man cave/office.  The ping pong table was my desk, and across the net sat all of the fun card stuff.  I still work here on occasion for after-hours tasks, but the table is a lot clearer now.  It's been a weird couple of years, but I would be lying if I said I wasn't looking forward to another global pandemic at least once in the next decade or so.  A real good one, too, that scientists just can't seem to get a handle on for a couple of years.  I actually told my wife the other day, in response to some news about people acting shitty toward one another, "You know, outside of family and a handful of close friends, I really don't want to be around anybody."  And it was the truth.  There's more entertainment available to me than I could consume in fifty lifetimes, and I have the capacity to create universes within my imagination far more interesting than what the daily drudgery holds.
That said, I appreciate the time many of you take to be part of this ongoing series, and there are even some of you I would consider friends, even though we have never met in person, or only have so fleetingly.  To everyone reading this, thank you.
Now let's get on with the proceedings.
1. Check out the list of available cards below. Select one (or a few) you want. Just remember, the more you claim, the better your trade material should be.

2. Send me an email with your choice of card(s) at bill13boehm@yahoo.com or DM me on Twitter @THORZUL
Please don't leave a request comment on the blog. This just confuses people, so don't do it, it will just be deleted and will not count.

3. I will reply to you as to the card's availability. First come, first serve. I will include my mailing address.

4. When I confirm the card of your choice, pick out one or more of your own cards or anything else you want to send me. A few guidelines about what you can't send: Nothing that should really be in the garbage, nothing perishable, and nothing illegal. (Notice I didn't say nothing immoral.) I've got a want list you could check out, too!

5. Send me whatever is was you picked out. Don't tell me what it is before you send it, I'd like to have it be a surprise! Include a SASE or you won't be getting your card.