It took several months to fully recover from the last group break we did, but I'm ready to have another go at it.  I wanted to do something that can fit everyone's budget, and I think I've got the perfect lot for this.  Here's the deal:
1. I've recently acquired a lot of over 1,700 insert cards from recent-years products.  The package arrived while I was on vacation, and it weighs in at just under 11 pounds of inserts.  Every card is an insert, none of that "base card junk" (h/t Curtis creator Ray Billingsley).  Every team will be a $15 buy-in, and if you want more than one team, additional teams will be $14 each, shipping included.
2. You can claim your team of choice in the comments.
3. Send PayPal payment to bill13boehm at yahoo dot com with the correct amount for the team(s) you choose.  The price includes the cost of shipping, of course.  Please try to pay within 24 hours of making your claim.
4. Please, please, please include your address as a note with your payment.  It will be infinitely easier to get your cards to you this way.
5. All cards will follow the franchise to the person who claimed it.
6. Cards with players representing multiple teams will be randomed off among all teams with a claim to the card, regardless of the status of the players appearing on it.
7. The opening of the box in which these cards will arrive (as well as any randomizations) will take place streaming live on Twitter (@Thorzul, in case you're not on the platform).  I will give at least 24 hours notice before doing the live stream.
8. Please check the comments before claiming any team.  First come, first serve.
TEAMS
1. Angels - gcrl PAID
2. Astros -
3. Athletics - Fuji PAID
4. Rangers -
5. Mariners - jackal726 PAID
6. White Sox - jackal726 PAID
7. Indians - Dfwbuck PAID
8. Royals - Waxtopia (Sorensen) PAID
9. Twins -
10. Tigers - the sewingmachineguy PAID
11. Red Sox - Matt PAID
12. Yankees - The Diamond King PAID
13. Blue Jays -
14. Orioles -
15. Rays -
16. Cubs -
17. Cardinals - The Diamond King PAID
18. Brewers - Thorzul
19. Pirates - Billy Suter PAID
20. Reds -
21. Padres - PunkRockPaint PAID
22. Diamondbacks -
23. Dodgers - night owl PAID
24. Giants - Fuji PAID
25. Rockies -
26. Braves - jackal726 PAID
27. Nationals/Expos - jackal726 PAID
28. Mets - Brett Alan PAID
29. Phillies - Jordan PAID
30. Marlins -
Posted by Death Stare Cards at 9:59 AM 19 comments: 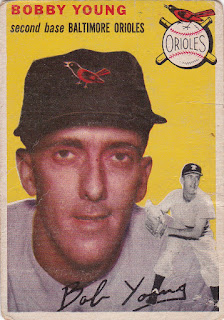 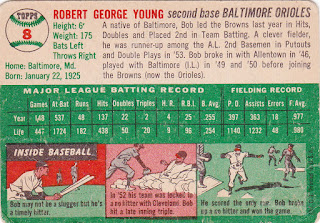 What Was I Thinking?:
Did you see the asterisk in the post title?  Well, that's because I was under the influence of nothing but high-quality H2O on that evening.  Since June 2, I've been abstaining from all of my vices (excepting June 11, the last day of school).  I even made myself a little check-off chart to hold myself to the strict regimen.  This program, which ends today, includes an edict to go for a run, do kettlebell exercises in my basement, eat a healthy OMAD meal, and abstain from snacks, alcohol, and soda.  So, when I bought this card, my head was clear, my senses sharp.
The seller listed this card with "POOR" in the title, but to me, this is how cards from the 1950s should look.  Rounded corners indicate love, and if all the paper from the back is intact, that's good enough for me.  A Baltimore man, Young got to play for his hometown Orioles for two seasons, sandwiched between a rookie cuppa with the Cardinals, a few years with the St. Louis Browns,  and then Cleveland.  A negative 2.1 career WAR isn't great, but he made it farther than most ever do.
Posted by Death Stare Cards at 4:55 PM 2 comments:

Bidding Under the Influence #2 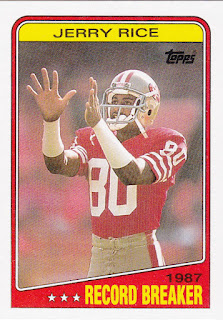 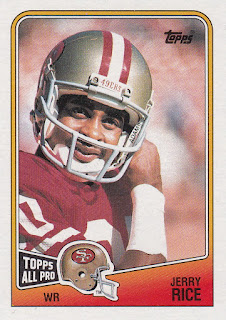 What Was I Thinking?:
Actually made a pretty good choice here.  Most of the Topps football sets post-1986 don't get much fanfare.  The '88 set has a nice clean design, but today's collecting world can't seem to look much farther than the Bo Jackson rookie card.  These are relatively early Rice cards, ones that give you a good look at the man who was just on his way to becoming the greatest receiver of all time.  They're both clean copies, totally worth the couple of bucks paid.  There are far more embarrassing things to spend one's money on as it's creeping up on 3:00 in the morning.
Posted by Death Stare Cards at 2:30 PM 3 comments:

Bidding Under the Influence #1

If you've been following me for any appreciable amount of time, you know that I am one to enjoy a beverage now and then.  Hey, I'm from Wisconsin, home of 12 of the top 20 drunkest cities in America.  Over the past five months, however, I've been more-or-less on a program to embody a healthier lifestyle.  I've lost over 25 pounds, in fact.  I was on the same sort of pace last year until the vacation my wife and I had planned was canceled.  Well, it's back on for 2021, scheduled to begin in a couple of weeks, and I would like to hit the beach in prime physical condition.  One of the tenets of my regimen has been limiting alcohol consumption to Friday nights (in general).
In an attempt to limit calories, I've recently taken a shine to Bang energy drinks (#NotSponsored).  They're great as a mixer, they have zero calories, and they have a bunch of fun flavors with words like "Unicorn" in the titles.  The problem, if you want to call it that, is that these drinks tend to keep me up way too late for my own good.  I might start off the night with a Bang cocktail, and then switch to some light beers, and before I know it, it's 2:30 in the morning and the birds are chirping.  And one of the side-effects of staying up so late, and the thrust of this article, is that I have found myself wading into the wee hours of eBay and making impulse purchases.  I have woken up in the morning, checked my email, and found a purchase order for something I only vaguely remember buying.  This series (hopefully a short one) intends to document these instances of Bidding Under the Influence (BUI).
Date: May 22, 2021
Time of Bid: 1:52:12 AM
Card: 2015 Topps Apex MLS #CJR-BF Benny Feilhaber Crest Jumbo Relic 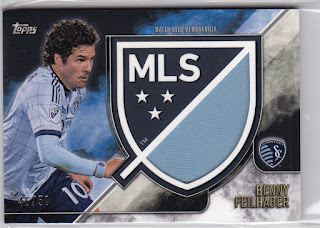 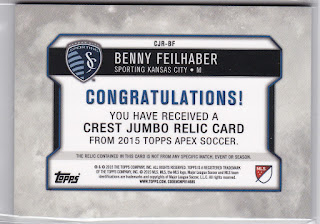 What Was I Thinking?:
Thankfully, my altered state of mind during these BUI situations contains a fail-safe that prevents me from spending more than a few dollars.  The price is definitely right for one of these jumbo swatch cards.  Am I a fan of Benny Feilhaber?  Not particularly.  He was a mainstay on the USMNT roster for several years, but there's nothing really drawing me to him.  I am pretty indifferent about Sporting KC, but they do have nice colors.  Powder blue swatches have always been a favorite of mine (see Yount, Robin).  I think I just have a good eye for a deal no mater the time or conditions, sobriety be damned.
*Disclaimer: All of the purchases in this series were made from the safety of my couch.  Don't ever drink (and bid) and drive.
Posted by Death Stare Cards at 8:19 AM 2 comments: