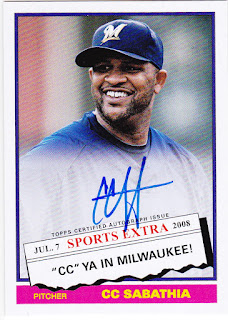 Bunch of firsts with this card.  To get my soon-to-be-Snickers-and-candy-corn-stained hands on this card, I had to go through some unfamiliar channels.  Yes, this is a redemption card.  Looking at my account, the last time I redeemed anything from Topps, it was for a set of 2011 USA Baseball refractors.  I have absolutely no recollection of this.  I'd have to look to see if these cards are still in one of my monster boxes, but I'm guessing I sold these?  No idea.  And before that, my last redemption for a 2011 Lineage Buster Posey AUTO.  I sold it for $113.  It was a rare instance of me selling at the apex of a card's value.  All copies currently for sale and recently sold have prices far below that.

This card is also Sabathia's first on-card AUTO as a Milwaukee Brewer.  His only other Brewer autos were stickers on the high-end Sterling product.  The signature on this card looks better in person, and of course without those annoying scanner lines.  I am very happy to have this card, and I was pleased with the turnaround time on the Topps redemption.  So much better to receive in the mail than the stacks of political ads I'm currently getting as a resident of a battleground state.

CC Sabathia is a bad motherfucker, and so is this card. 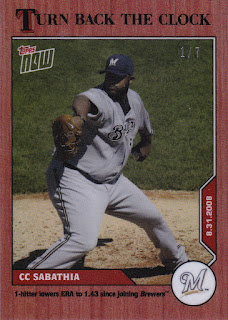 Aside from the 1/1's, this is the lowest numbered card I have come across on this collecting mission.  Apparently when you buy a Topps Now card directly from the manufacturer, there's a chance that you'll get a parallel.  With the wood grain '87 Topps border, it's only natural that these were made with a different "stain" of lumber.  You can probably find this card in eBay's completed items listing, but I am glad to say that I paid nowhere near the asking price.  The quest continues...

Posted by Death Stare Cards at 1:14 PM No comments:

An embarrassment of riches.  The floodgates have officially been opened after years of dormancy.
2020 Topps Now Turn Back the Clock #154 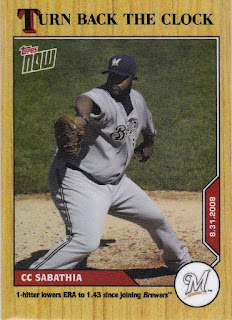 When was this card released?  I have no idea.  I'm sure I could look it up somewhere, figure out what I was doing and why I missed it.  No matter.  Topps Now is not aimed at me, so I pay it no mind.  At some point this year, Topps doubled down on the CC recognition, this time to commemorate his near-no-hitter against the Pirates.  At the time I thought it was in bad taste to whine about the missed call that turned an error into a hit.  We were still in the chase for a playoff spot, an ordeal that would last until the final day of the season.  Tempting the baseball gods would not have been wise back then, but in retrospect, I wish he had been credited with the no-hitter. 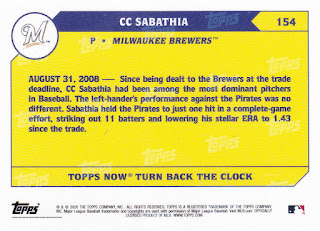 The Turn Back the Clock design isn't quite the same as the '87 Topps originals, but the important wood grain element is what counts.  The backs of these cards are cool, with a sheer coating that contains a holographic Topps logo.  Good looking card and great addition to the collection.

So I had to check to make sure, but it's been seven years since there were any new cards released of CC Sabathia as a Brewer.  (Those would be from 2013's Panini Hometown Heroes.)  It makes sense, given CC's success and retirement as a New York Yankee since then.  It was brought to my attention recently that he was being featured on some inserts in this year's Archives set.  Oftentimes these things have a tendency to burn hot for about two weeks, with lots of examples available on eBay, then fade away once the marks move on to the next new product.  Luckily, his cards have been easy to find and priced right. 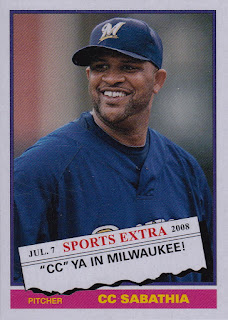 I agree wholeheartedly that Sabathia's 2008 Brewers run is worthy of a card like this, but why wait until the... 12th anniversary?  That being said, I'm glad it exists, and I've been tracking down some of the autographed parallels that have been released.  The '76 Traded is a set I've completed, and as far as trades go, Milwaukee hasn't made too many to rival this one.

By the way, you should check out Sabathia's baseball podcast, R2C2, on The Ringer.  He's super likeable and apparently enjoys cussing a lot.

Posted by Death Stare Cards at 3:03 PM No comments: