Man, did we collectors who are in it for the love of cards have to be selective or what, this year?!  "Deliberate" was the name of the game when opening product in 2020.  Decisions had to be made, and they had to be wise.  So much has been written about the card (mark) explosion that I can't really add any insight on the situation.  Don't worry, things will change once people can spend their money on other things.  I still contend that when people are able to go to concerts and music festivals featuring artists who aren't complete asshats, the bubble will burst.  Luckily, I was able to make some card purchases pre-pandemic, when prices for wax were reasonable.
It was a hard decision to select my top five this year, as there were a good number of very good cards, but few were transcendent.  Let's check out the ones that fell just short of making the cut.
Cards: 2018 Topps WWE Then Now Forever #178 Shinsuke Nakamura AUTO (12/99) and #162 Ricochet AUTO (69/99) 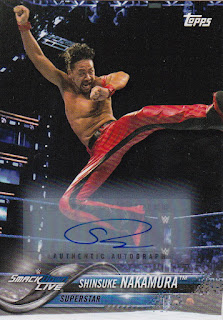 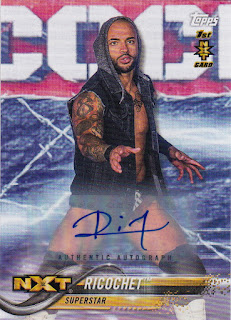 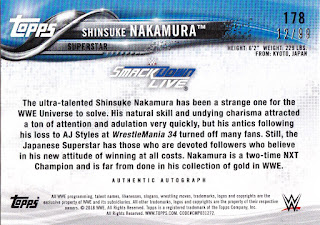 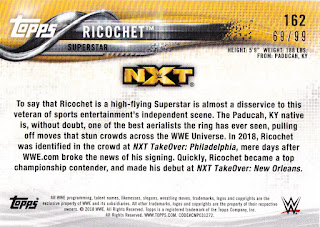 In a different year, these might have made the list, but unfortunately WWE has been bungling their treatment of two guys who should be can't miss superstars.  The amount of talent on these two card is staggering, but Nakamura is stuck in a "Tell 'em Steve-Dave" role in his tag team with Cesaro, and Ricochet is on Raw, which I don't really watch anymore.  I hear he was part of the Hurt Business storyline, but kind of got shoved aside once they got over.  What a waste.  These should be much higher, as these are the first autos I have of either guy.  Let's chalk it up to the no-audience struggles WWE has been having, and have high hopes that they get better pushes in 2021.
Card: 2018 Topps WWE Legends #A-JS Jake "The Snake" Roberts AUTO Silver Parallel (47/50) 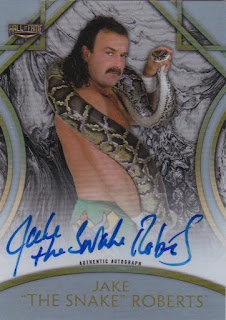 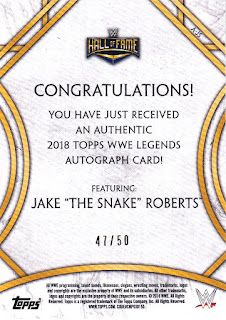 While I already pulled a Jake auto as part of last year's mind-blowing box, another one I opened in January had a better card in it, but not as good of a supporting cast.  This signature is on-card and, more importantly, contains his nickname.  We're living in a world where the WWE is not, creatively, at least, the top wrestling company, and where I saw Jake live on my television as recently as last night.  AEW is truly spoiling us.  It was really hard not to have this one in the top five proper, but that's the way it goes sometimes.
Stay tuned for more great pulls coming soon!
Posted by Death Stare Cards at 8:16 PM