So I guess those assholes who tried to take over my blog thought they were going to turn it into a Superchurch daycare or some such thing, eh?  No posts on Sundays, retail-only education in favor of other safe collecting methods, stuff like that?
Well, I hate to break it to them, but Death Stare Cards is back in the hands of Thorzul, baby!
They figured they could sneak the Aubrey Huffs and Trevor Bauers and Mariano Riveras of the world into each of every box of this year's Card-vent calendar.  WRONG-O!!!  I run the show here, and at this http address, it's my way or the highway.  Baby Jesuses and shepherds and shit?  Not bloody likely!  We've got the real calendar secure on the premises, complete with same-sex hedgehogs making out and some of the most secular shit you can think of, and we're going full speed ahead. 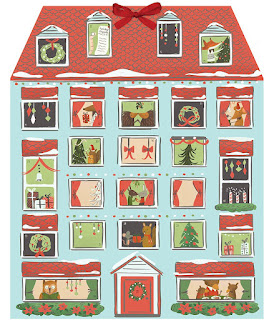 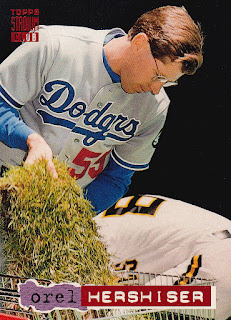 Today's card from the calendar features an earlier scion of the Christian right, one Orel Hershiser.  And on this card he is depicted taking part in one of baseball's time-honored traditions, the Spreading of the Hay.  A Pirates bat-boy is ordering around the former Cy Young winner and World Series MVP, critiquing his performance, and preparing a report for the front office.  Oh, so Tommy Lasorda nicknamed you "Bulldog?"  Tough shit, keep spreading the hay, rookie.
The Spreading of the Hay is a throwback to pre-war baseball practice, where the youngest and least assertive players on the rosters would unload bales of hay from trucks to provide overflow seating during mid-summer games.  In the 1980s, the tradition adapted to the times, and the clubhouse rookies would be sent to the nearest grocery store to seek out a shopping cart, which would be used to carry loose clumps of hay that would later be ceremoniously distributed in foul territory at random intervals.  The 1994 baseball strike effectively ended the practice.
Spread that hay, Orel, and do a good job!  God is watching. 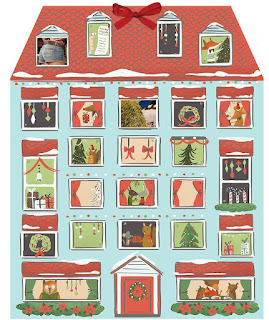 Email ThisBlogThis!Share to TwitterShare to FacebookShare to Pinterest
Labels: CARD-VENT 2021