I went in to my first National Sports Collectors Convention with an airtight plan, and, for the most part, I stuck to it. One of the top items on my wish list was the remainder of the 1971-72 Topps basketball set. I knocked out about half of the ten cards I needed on day one, and decided that finding the rest would be day two's first order of business. Here are the highlights.

#200 Dan Issel
This is Issel's rookie card, subject to quite a premium. He was a scoring machine, but splitting his time between the ABA and NBA hasn't helped his legacy. 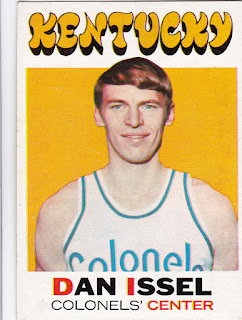 #91 Rudy Tomjanovich
Like Issel, became a successful coach following his playing career. This is also his rookie card. He looks different not only because he is younger, but also due to the punch from Kermit Washington during an on-court brawl that nearly killed him. For some reason the phrase "rearranged his face" sticks out from something I read about the incident when I was younger. Rudy T of course led the Rockets to the NBA title in 1994 and 1995. 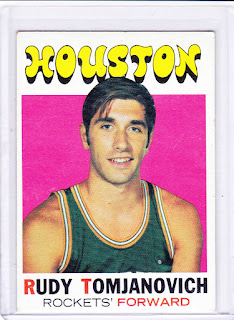 #121 Gail Goodrich
This was the only other one I ended up paying more than a couple of bucks for. Goodrich is a Hall of Famer who spent most of his career with the Lakers, so it makes sense. On this card he is seen using the backwards jersey technique to common to this set. Apparently Topps did not have the rights to NBA trademarks this year, so many players are shown with their name on their chest. I love a good workaround. 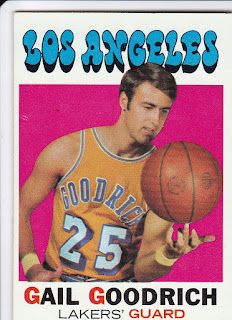 And then all the rest. No big names left, just ABA commons. I was able to find most in nice condition. All that's left now is to decide which vintage basketball set to chase next. 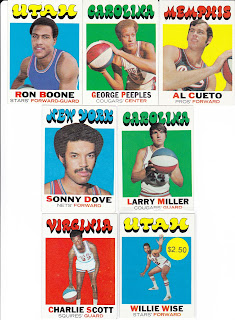 Posted by Death Stare Cards at 9:35 AM

Email ThisBlogThis!Share to TwitterShare to FacebookShare to Pinterest
Labels: NSCC