In the middle of the Thursday session, I found a table that had a big box of wrestling inserts, autos, and relics. The prices were right and when I packaged a bunch of Topps WWE relics together, the guy cut me a nice deal that was about a dollar off each card's sticker price. Let's go.

2015 Topps The Miz
Interesting two-color swatch on this one. This, you'll see, will be a theme moving forward. 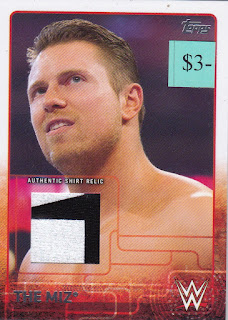 2016 Heritage Cesaro Bronze (050/150)
This swatch looks to be from this piece of merch, but it's also possible it came from his later Cesaro Section shirt that was super popular. 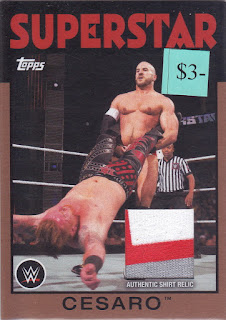 2015 Chrome Kofi Kingston
Just blue, but $2 for a relic from the guy who's THE champ right now? A no-brainer. 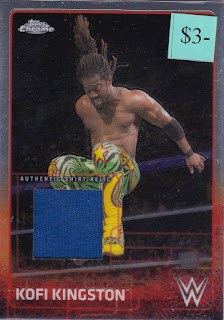 2015 Heritage Seth Rollins
A bit of strange provenance on this card. The picture shows Seth winning the 2014 MITB match, but the back says the mat relic is from the 2015 event. Oh well, at least it reminds me of his heel run when I first got into wrestling that made Rollins my favorite current wrestler. 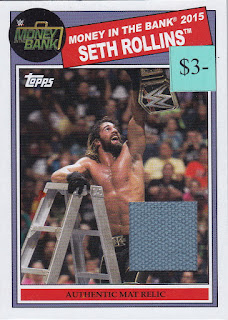 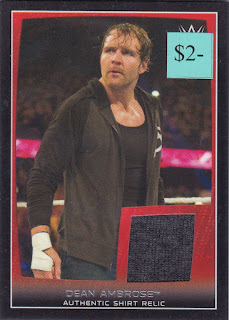 2017 Topps Johnny Gargano Blue (38/50)
Perhaps the steal of this purchase. A quick check shows that the standard version of this card (#/199) is not selling for below $20 on eBay currently. Johnny Wrestling is a lot of fun to watch and should soon have a great run on the main roster. 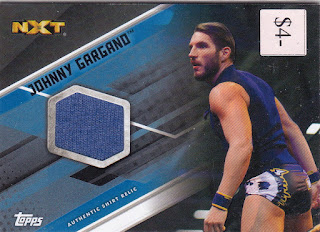