So over the past week I've dug out my old Seinfeld DVDs in an effort to watch the entire series from the beginning. That first season is a bit rough around the edges, but it establishes the foundation for what's to come. Almost all of the characters seem like "diet" versions of themselves: Kramer is odd, but never wacky, Elaine is much less of a trainwreck, and George seems to be a successful real estate agent. One little entertaining bit of mise-en-scene caught my eye, however. In the second episode (actually the fourth to be broadcast, but for some reason second on the DVD set), there's a shot in Jerry's apartment where an interesting item is visible atop his refrigerator. 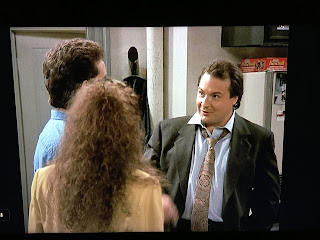 To the untrained eye, it's a box that says "Baseball" on it, but any good collector will be quick to recognize that it's a box of 1990 Donruss baseball cards. Fitting, since the splotchy red border design looks like something that Elaine Benes would wear on a blouse or vest. 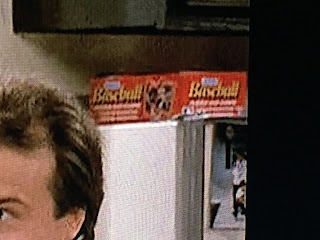 The box is visible in a couple more episodes in season 1, but by the time season 2 arrives, it's gone. Perhaps Jerry moved on to collecting high-end Stadium Club? One can only dream.
Posted by Death Stare Cards at 4:54 PM

Email ThisBlogThis!Share to TwitterShare to FacebookShare to Pinterest
Labels: TV