Trade Me Anything XIV #7

We've gotten used to shifting sports schedules over the past year, and Trade Me Anything is not immune from the same fate.  This pleasant surprise arrived in the mail from Zpop earlier this week.  Let's check it out. 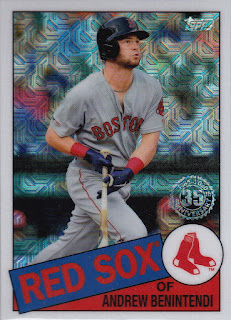 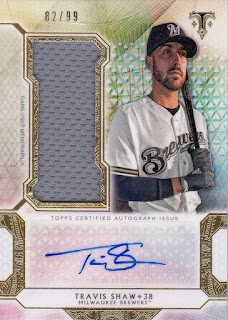 Man, that Shaw sure is a nice card.  And this trade showed how quickly things can change.  When TMA XIV kicked off on November 8 of last year, Shaw hadn't yet been welcomed back to Milwaukee.  He was signed to a minor league contract in February, going on to make the team and hit a game-tying 2-run double in the bottom of the ninth on opening day, arguably the play of the game (which was won in the 10th inning by the Brewers over the Twins).
Contrast that with Benentendi, who was traded from the Red Sox to the Royals in February.  Andrew has yet to make much of an impact for Kansas City, currently batting .190 over the first five games.  It's early, though, things can change.
Thanks, Zpop!  I am actually quite pleased that TMA season can last so long.
Posted by Death Stare Cards at 1:51 PM