We've got Lobo on the front of the pack doing a "neener-neener" face and sticking out his tongue, which has A LOT of drool hanging off of it.  Does this portend interesting contents inside? 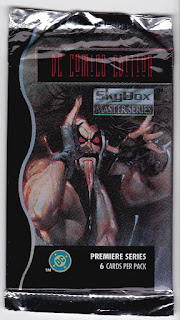 87 Black Canary
Fun character, but can't really carry a title on her own.  Great in Birds of Prey and when dishing it out at Oliver Queen. 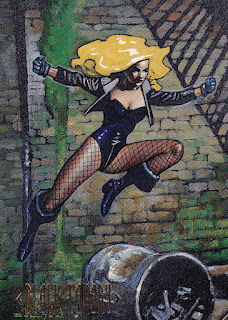 75 Argus
No idea.  Apparently a villain who terrorizes Keystone City with his power to tune in to the full electromagnetic spectrum.  Lame. 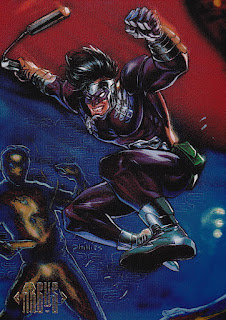 60 Dr. Fate
Hmmmm, when I had the Super Powers Dr. Fate action figure when I was a kid, I don't remember him being quite so... shapely?  The iteration of the character shown here is from the period when Inza Nelson wore the helmet of Nabu the Wise.  This is already one of the top five costumes in DC Comics history without the sexxxay butt and calves. 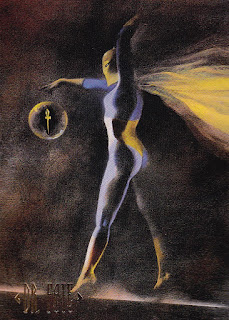 17 Andromeda
Part of the Legionnaires team, I guess.  Never read an issue. 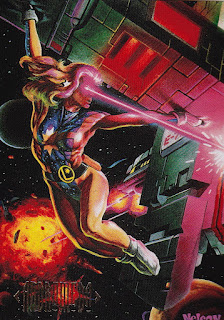 6 Lex Luthor II
The explanation on the back of this card is just confusing, something about brain swapping and death faking.  They should have devoted some copy to account for the blatant rip-off of Charles Xavier.
Bald?  Check.
Futuristic wheelchair?  Check.
Blanket on legs?  Check.
C&D letter on its way. 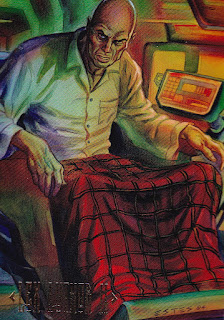 39 Raven
Another one I never heard of.  You can read the back yourself, it's a convoluted mess.  I can't in good conscience show the front of this card.  Raven's body looks like one of those roasts you might see tied up with string at a butcher shop and her costume is a cross between Cenobite swimwear and the getup Sean Connery wore in Zardoz.  I'll leave it to your imagination. 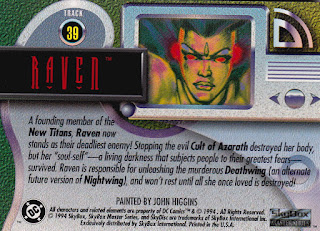 Got some interesting characters here, most of them unfamiliar to me, but I really like the variety of art styles presented.  I'd be interested in seeing more cards in the set, especially the 1:18 foils and the 1:36 Spectra-etch cards.