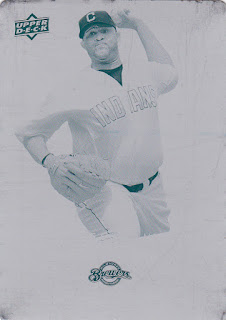 These days, with few-to-no new actual sporting events worth talking about, there are a lot of pieces being written about sports from the past.  One of them I caught recently was about the 2008 mid-season trade the Brewers made for Sabathia.  In my lifetime, he was the best pitcher the Brewers have ever had.  Prior to Sabathia, the candidates were Teddy Higuera, who flamed out after a few years that hinted at possible brilliance, and Ben Sheets, who was a solid #1 guy for many years, but came nowhere close to a Kershaw or a Verlander. 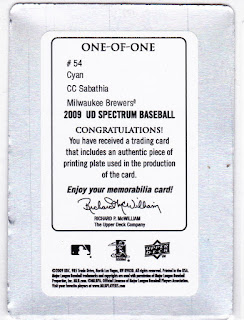 Going into a game and being reasonably confident that our guy was going to shut the other team's offense down was something I had never experienced as a fan.  For a team trying to make the playoffs for the first time in 26 years, feeling that every five days you were guaranteed to get a win was just huge.  He was part of my sport fan timeline for just a few months, and his final appearance was one we'd like to forget, but the joy he brought is why I continue to hunt these cards down.

This is the third Spectrum plate I've been able to acquire.  It's unthinkable, I know, but there's always a glimmer of hope that the black printing plate of this card shows up.  When it does, I'll be there for it.