A few weeks ago on Twitter I posted that I had acquired a card for my collection that I had been seeking for a very long time.  It the time since then, it did arrive safely.

I started collecting Robin Yount cards in 2007, shortly after finding out that eBay and card grading had made cards I found far too expensive as a child much more attainable.  I got a Yount rookie for somewhere around $20.  Sure, it had a soft corner and the centering was not great, but it was the real deal, something I had only glimpsed in magazines and screw-down holders at shows.

After that, I started buying large lots of Yount cards, many of them oddball stuff from the '80s and '90s as well as base cards of his from sets produced after his retirement.  The ones that really caught my eye were from the 2005 Upper Deck Heroes set.  These were a throwback to the Heroes inserts that began appearing in 1990 with Reggie Jackson and Nolan Ryan.  It was fun to find out that there were indeed five Yount Heroes cards in the 2005 set, and that they came in a rainbow of colors.  On my old blog I shared a partial completion of that set, finishing off the red, green, bronze, and blue parallels, complete with autos and jerseys (with the blue unsigned parallels being particularly tough, numbered to 10).

One of the incomplete subsets of this pursuit was the auto/jersey gold.  Until now. 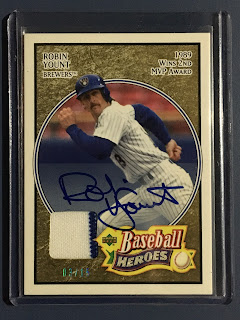 It's a beauty, isn't it?  And it's even better when displayed with his four brethren. 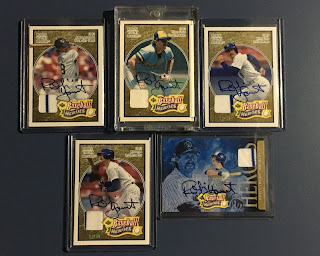 Over the years, I've been able to get my hands on some of the 1/1's in this set, which come in standard form and with a jersey relic (no autos available). 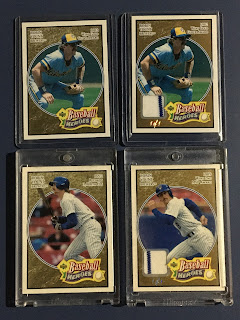 My Yount collecting has tailed off in recent years for a number of reasons.  For starters, the logo-free Panini cards usually look like garbage, and Topps has had trouble coming up with many new photos for Yount cards.  However, I'll still be on the lookout for new additions to this set.

Posted by Death Stare Cards at 9:26 AM

Email ThisBlogThis!Share to TwitterShare to FacebookShare to Pinterest
Labels: YOUNT