Bidding Under the Influence #8 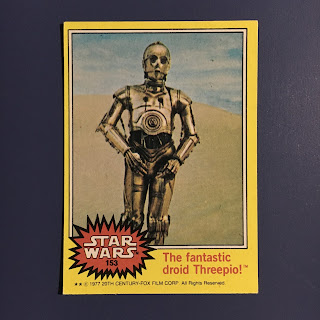 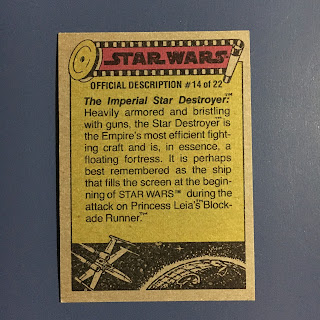 What Was I Thinking?:
While this is not my first '77 Star Wars card, it's the first series 3 yellow border one I've ever owned.  Yellow cards are a weakness of mine.  Chalk it up to biology.  Did you know that the human eye seeks out yellow first when looking at an array of colors?  Maybe that's why I always rush to the defense of 1991 Fleer.  And those 1984 Topps Nestle premium cards?  Turn those into a fluffy textile pattern, cloak me in its warmth, and spank my bottom.
The penny auction price was a nice bonus.  Even in a PWE, the seller is clearing almost nothing on a sale like this.  The volume has to be staggering in order to eke out a living at that rate.  Best of luck to phillysportsstore and their business model.  They're doing God's work.  As for C-3PO, he's grown on me over the past 40 years or so.  He's constantly thrown into battle in a conflict he couldn't give two shits about, and he's ill-equipped to handle any sort of combat.  The poor guy had to spend the second half of ESB in 15 pieces in a JanSport strapped to Chewbacca's back.  Then in the next movie, Salacious Crumb nibbled his eye out of his socket, an eye that he didn't lose completely due to the robotic equivalent of the optic nerve keeping it from rolling into Jabba's liquid taint stench puddle.  Cut the android some slack.
Posted by Death Stare Cards at 4:30 PM