The Case of the Mysterious Mailday

Yesterday (Saturday) morning, I put a few outgoing envelopes in my mailbox for the mail carrier to pick up during the day's delivery.  It so happened that I had not collected Friday afternoon's mail yet.  It was a small amount, just one piece of junk mail and a plain white envelope addressed to me.

I was expecting a card that I had recently bought.  (Allow for a little diversion here.  I am normally the farthest thing from a prospector, but I have recently started stockpiling Dare Ogunbowale cards.  This former Badger had a hard time breaking onto a gameday roster, but last year actually got a bunch of receptions and carries and scored two touchdowns in short yardage situations for the Buccaneers.  On the off chance that Dare gets targeted by Tom Brady, his cards should quickly go up in value.)  The card I was expecting was not what had arrived, though.

Upon opening the PWE, I found this. 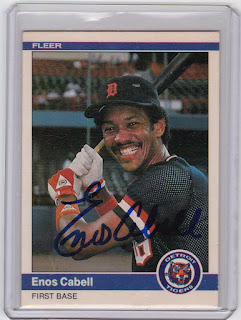 Now, I have received unsolicited cards plenty of times, but this was something different.  It's a cool card, especially from a guy who, according to one source, is a pretty tough get.  (A TTM success rate of 33%.)  However, it's not something I really collect.

Time to go full fuckin' Fenton (Hardy) here and investigate.  I put a call out on Twitter for the anonymous benefactor to step forward, but none did.  See, the one clue available to me was a return address on the envelope with a Rochester, NY, location.

What could have happened, boxcar children?  I have a few theories:
1. The Kind-Hearted Gentleman
Someone I've traded with in the past just want to pay forward some favor.  Nice.  I like that.
2. The Accidental Switcheroo
I found it odd that the address on the envelope sent to me is an exact, though handwritten, match for the return address stamp I use when sending cards out.  It's possible that someone had this card intended for a Detroit Tigers fan, and they were working from some old packaging to find the address, and mine got mixed up with another.  It happens.
3. The Drawing of the Four
The only other thing I can think of is that this is a veiled invitation to a proto-Satanic gathering involving bloodletting, human sacrifice, and discussion of how Pacific Trading Cards forever changed the norms and expectations of intra-box card collation.  There's a small blue dot on the toploader holding this card.  Is it some sort of additional clue?  Am I to gather with a group of other recipients and assemble by colored dot?  "I am lower-right light blue, looking for top-left light blue to begin the mission."  I await further instructions. 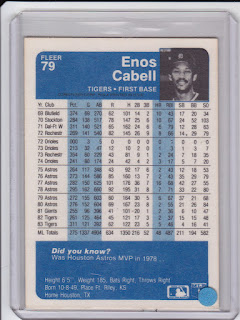 Whatever the case, if you sent this card, purposely or in error, please get in touch.  I can forward the card to the proper owner if need be.
Posted by Death Stare Cards at 10:37 AM